There are times when the deaths of friends come like raindrops: first one, then another, then another and another, until it feels like a season of its own, death coming like a light rain.  These past few days have been one of those times.  Of course, there’s nothing unusual about death; people die every day, and the longer one lives, the more accustomed one becomes to the fact of death, which is a fact of life.  Seen in this light, death no longer has a particular hold on us, and it even becomes in a sense ordinary.  And it is certainly to be expected—except when it comes unexpectedly.

During this past week many of us witnessed the unexpected death of Howard Gray.  Howard was an exceptional man, an exceptional Jesuit–a Jesuit’s Jesuit, belonging to a generation of giants.  He had a kind of avuncular quality about him, an ironic sense of life, an easy manner suggestive of someone at home with himself and with life, a literary imagination, and a genius for expressing things of faith.  He was also a gifted interpreter of the Ignatian tradition, from the history and Constitutions of the Society of Jesus to the Spiritual Exercises.  He was always reading, and his deep immersion in literature and music was reflected in th 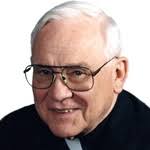 e ease and grace of his manner.

Howard’s death was the result of a car crash.  He was a passenger.  Yes, he was approaching 90, and some would say that he had lived a good, long life; and that he did.  Yet there was still something about the way of his dying that made his departure unseemly.  I suspect, though, that in looking at it, Howard would probably joke about how absurd are the creaturely aspects of our lives, how even the most sublime of souls can conclude this earthly sojourn not in clouds of glory, but with a thud.

I have often wondered what it was that made me among the hundreds—surely thousands—who loved him.  What was it about him?  So much.  But I think the answer is simpler than what a mere biography could really convey.  Howard knew what meant to love generously, and to show that capacity for love to others.  He knew how to affirm people with a wry smile or a wink, but also to give them something substantive—a word, a thought, a maxim, an idea—to turn around in their hearts.  His gift was expressed in genuine care for other people, and in wanting to see them glow from within.  He took sheer delight in us.  And it all came with a wonderful sense of self-deprecation and humor about life as we find it, and as we fumble at living it.

I shall dearly miss him.