It seems fitting that this last week of the liturgical year features readings from the Apocalypse (aka Revelation), replete as it is with images of a world gone awry and a final conflagration.

The other day someone wondered out loud to me whether we were not in the midst of the end times. I could understand her wonderment. The events to which we awaken each morning, one tragedy cascading upon another, are enough to overwhelm the most stout-hearted.  Here in California, the earth itself seems to have revolted.  And we are, each of us, continually faced with new personal challenges, some with the challenge simply to survive in a heartless world.  It is easy—too easy—to succumb to the view that everything is winding down into a dystopian morass. 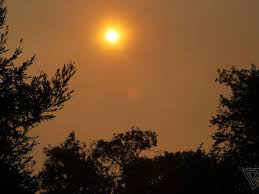 But I found myself answering my friend’s quandary by saying, “I do not believe in end times.”  Yes, of course, I can imagine that one day the cosmos as we know it will sputter to a close, although there is plenty of philosophical warrant to suggest that what we call creation transcends time and is endowed with an eternality dependent on God.  And, yes, it is obvious that in the course of human history, moral and natural catastrophes have happened due to human agency, and that we have fallen into massive darkness. I can imagine that there was a temptation among some of the Jews in Hitler’s camps to wonder about the end times, too.

What I meant by saying that I do not believe in “end times” was that I do not believe that human life in history, no matter how dark, leads to an end that we can actually mark or clearly know.  Life is too turgid for that, too chaotic and unpredictable.  It therefore makes no real sense to conclude that we really know what’s going on.

The expanse of evil and of suffering is such that we cannot finally make sense of it or pin reasons to its existence.  Creation is chaotic, and the human factor makes it even more so.  To try to make clear sense of how a “good God” can be reconciled with this fact is well-nigh futile, for God eludes such categories.  While we cannot accept the darkness of the human heart when it triumphs in sin, we do have to accept the ultimate mystery of evil as something we cannot solve by inserting it into a box labeled “the end times.”

The only sure “end time” is the moment of death, which will visit each of us sooner or later.  Death marks the end of time, indeed the end of the world as we know it.  But death in and of itself, is not an apocalyptic event. It may occur within what seem to be end times, and it may come violently; but it is in itself, on a creaturely level, a natural event, the way that we fall more deeply into the ambit of God’s embrace—even if that death comes as an affront to life and to God.  As I said to my friend, we human beings are called to live in a hope deeper than the certainties of despair.

And people do.  The outpouring of revulsion over what has happened to us as a people in the wake of yet another shooting; pathos over the tragedies people endure by dint of climate-induced natural disasters; the empathy we can feel for one another as we suffer; the love we miraculously share despite all odds; the prayers we offer from our hearts—these are all signs of a hope that shines through the falling embers and that will one day light the entire sky again.

Far from end times, these signs of hope point to new beginnings, new life. The Book of Revelation, with all those awful images, concludes on such a hopeful note:

Now the dwelling of God is with human beings, and he will live with them.  God will wipe every tear from their eyes. There will be no more death or mourning or crying or pain, for the old order of things has passed away. He who was seated on the throne said, “Look: I am making all things new.”